Creativity is a curse. I feel like I'm wandering in a maze of mirrors. On the mirrors are thoughts I convince myself to collect and try to make sense of. When (and if) I come out, there's supposed to be a finished work ...
Posted by Unknown at 11:24 AM No comments:

Passing stages and phases, hard to fathom how it goes. I've suspended work in video art and filmmaking, in the Video Curio Theater, my dimly-lit backstreet internet venue for the experimental work. Writing seems to be the creative thing, more intimate and integral, though why I can't say.
I mourn this transition a little because of the seven years I've invested, a couple of good documentaries filmed, some social issues exposed, experimental work I feel was innovative. I'm not a good judge, though, and it was becoming tiresome, both in the doing and the pondering.
I'm not sure about this course either, the writing. But here I am.
Posted by Unknown at 3:31 AM No comments:

"RUSTY NAIL" TO PUBLISH 2 POEMS - BOOK IS ON AMAZON

The online and print literary magazine "The Rusty Nail" has accepted two of my poems for publication -- "Alien Bones" and "Tick Tock." Exciting news to me ... I'll link to them when it happens.
Also, "Political Grace: The Gift of Resistance" is now available on Amazon.com at this link ... Check it out please.
Posted by Unknown at 7:31 AM No comments:

BACKGROUND FOR "POLITICAL GRACE" IS FIRST-HAND ... 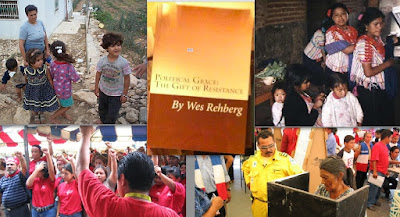 These are scenes from a few of the sites of resistance we've visited that helped shape some of the background and reflections that are part of "Political Grace: A Gift of Resistance" ... scenes from Chiapas, Mexico; El Salvador; Palestine, in this view ... photos aren't in the book ...
To explore our human-rights work more deeply visit the Rehberg Institute web site.
Posted by Unknown at 5:26 AM No comments:

"POLITICAL GRACE: THE GIFT OF RESISTANCE" NOW ON SALE ... 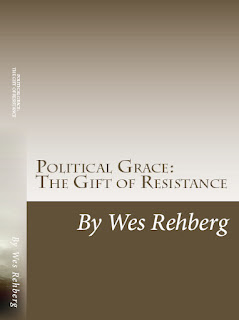 My paperback "Political Grace: The Gift of Resistance" is now available for purchase at this Create Space link and soon at Amazon.com -- Check it out ! ... Synopsis viewable at Create Space as well -- And, links for purchase and a synopsis are also viewable on its own web page here on our site ....
Posted by Unknown at 1:19 PM No comments:

The fog. Enoch felt secure in its midst.

It muted city sounds. It was a cloak that left the sensation that he was connected, like with a visible spirit, yet separate, suspended.

He always seemed to himself a little distant, out of place. Yes, he played with others, stickball in the schoolyard, punchball, stoopball, roller hockey on the streets, was even good at it. But there was a division between all this and himself that he knew but couldn't fathom.

“Maybe it’s my name,” he thought, walking down narrow 208th Street to a corner candy store -- “Enoch Jubal.” Some his age would call him “Jewboy.”

Actually, his Hungarian-born grandfather was a Catholic, his grandmother a Lutheran, and Enoch a skeptical communicant in the Catholic church. His grandfather had an Austrian name, Rothpauer, but his drinking buddies called him “Rummy.” “Rummy Jewboy,” the young boys would say, teasing maliciously, when Enoch let on about his grandfather’s nickname.

Walking in the fog that day, a wisp of mist rose from the street’s manhole covers. Sewer smell. It carried. He let himself feel enveloped by that too...

Posted by Unknown at 1:22 PM No comments:

"The poet brings the words, you bring your life and together you make the song" -- Christopher Burns

Shared from The Seashell Anthology of Great Poetry
Posted by Unknown at 9:41 AM No comments:

Below, in the hollow, Madelaine Krutcher adjusted herself on the floor where she fell trying to retrieve a bottle of gin from the kitchen inside her 40-year-old house, nested among tall loblolly pines, tulip trees, sweet gums and maples. She launched into a harangue as she tried to sit up.
"Hate this thing, what, quad cane, fell again, but no one’s falling for me, don't they know I'm a Red Hat girl, damn legs swollen,” she said as if someone was there. “Cat tripped me, Snookie sweet pup lick my face, Nippy, you're ignoring me - Now they want me to have a motorized wheel chair, little ramps on my hardwood floor."
She had fallen in a hallway alongside three uncleaned litter boxes. Her elbow was in one, part of her robe in another. She was barefoot.
"Feel me, feel my skin, feel it all - nobody touches me - I'm the nice one with cute little dogs, lots of cats. Doctor says at my age, what, I need a health care worker. If he's a man OK, otherwise, skip it."
Krutcher removed her arm from the cat litter with what she thought was a gesture of grace, pretending she was on stage.
"Drink, drink, drink, drink, I need a drink, a man too, Horace is gone, other one also, husband, what was his name? Age makes you forget but how could I forget that. Rusty, Rusty was lusty, dead too. Oh can't get up. Oh no, not Rusty . . . Russell! -- Damn I gotta get up, nobody's going to help me."
Her monologues like this became frequent, nasty in tone. She liked to hear her voice, thought she should have been an actress, a femme fatal. Never too late, she believed.
“Y’all see me out there,” she said to the living room uttering a laugh. “I’m a gonna get up. I expect applause.”
She managed to rise, stabilize herself uneasily on her cane, and reach for the bottle of gin on the black formica counter in the kitchen to return to the screened-in back porch where earlier she had carried a melting tray of ice, a tall floral glass and a bottle of tonic, now on an opaque glass patio table. She sat unsteadily in a lawn chair, filled the glass, took a long drink and shouted;
"You out there, you damn coyote? You the one who was jumping at the porch door for my little pup Nippy?"
A canine chorus of dogs had begun their nightsong of barking from other homes in the older subdivision carved into the steeply bounded hollow.
"Oh yes oh yes sing it sing it. You hear that Nippy, they’re singing to you and me?" Nippy made a little motion with his tail but otherwise didn't move. Snookie was off somewhere.
“Snookie,” she called. “Snookie, get out here and keep me company.
Coyote, you out there?"
Above, on the ridge overlooking Krutcher’s home, stood Billy Daisy, short, disheveled, in his 30s, eyes focusing and unfocusing in the fading late summer twilight, sweating in the heat in front of a double-wide mobile home where a couple inside was cooking enough meth for tonight and tomorrow, they said. ...
Posted by Unknown at 2:09 AM No comments:

Intensive reading and writing are in process, and even reconstituting, just a little, a doctoral dissertation for self-publication that puts a book on Amazon, joining my documentaries there, which doesn't mean it will be bought or read but could get a little more exposure than it's gotten forgotten buried on my website along with other pages I haven't looked at in years.
One short story completed, a novel started as well as another short story and a large amount of Scandinavian and other noir reading plus Joyce Carol Oates and Annie Dillard, research into markets plus hooking up with the Chattanooga Writers Group and one of its fiction writers gatherings.
Style and character - and fearlessness, going forth with that in the foreground at the moment conscious of storytelling too but not formulaic. My voice, too. On paper... I know what it feels like, even imagine it complex, and am in awe at the way some authors can distill that complexity and unwind it in long lucid passages. Or defer it intermittently throughout a work thematically along with other themes similarly intermittent, woven.
So now it seems the first phase of this new way to me to be creative has passed. A slight pause to look at the maze from above, then back to it.
Posted by Unknown at 6:42 PM No comments: