"STRINGER," "HILL,' AND THE INNOVATIVE AGED


New synopsis for my novel in progress: “Down from the Hill” -- It’s a sequel to "Stringer" in which the aged characters are appalled by the impact of a psychiatric center's downsizing which leaves mental patients on the streets without care. In their news work they face eruptions from the past and peel layers away of their own relationships, illusions, sexuality, inhibitions and their understandings of reality and transformation. These understandings are later deepened as they travel to Morocco through Spain where the male protagonist would meet his son for the first time. And they separate later, one to the Netherlands, another to Chiapas in southern Mexico, and the third to recover from injuries in upstate NY. And thus to the end ...


One thing I'm doing in "Stringer" and "Hill" and the novel that may follow is challenging the ridiculous stereotypes about people my age and the way some aged people let themselves be defined by them -- so very absurd ... Many of us are as intricately intense, physical, creatively thoughtful and innovative, and as emotionally keen as people of any age.

Posted by Unknown at 5:23 PM No comments:

Accepted for publication: My short story "Scooter" in the next issue of eFiction Magazine ....


Three poetry "declines" from three other journals, on the other hand, as of June 24.

Posted by Unknown at 2:17 AM No comments:

My short novel "Stringer" is now available for Kindle devices and apps at this link:
http://www.amazon.com/dp/B008C0NC1O/ref=rdr_kindle_ext_tmb

Once again, a synopsis:


RETIRED JOURNALIST MENACED AS HE PROBES
DEGRADING CONDITIONS RURAL ELDERLY FACE
A retired and semi-reclusive former journalist who strings for a local weekly newspaper is urged by a woman activist who brings meals to rural homebound elderly to help her expose degrading conditions some live in.
Her request involves him and his sculptor wife in an investigation that leads to threats, local political corruption, personal conflict, a reunion with a painful past and a choice about his future.
Posted by Unknown at 10:18 AM No comments:

Sequel is tentatively titled "Down from the Hill" -

Mike Hancock climbed the sagging stairs to a third-floor door that let out to an asphalt roof. He felt light rain as crossed the roof to another door; opened it and entered a one-room apartment. They call it an “efficiency,” he thought. My place. Out of that damn looney bin again. I wonder what this roof will be like as winter gets worse. What a hole. An apartment with its only door on the roof.
“Meds,” he said to himself. “Where the hell did I put them. I feel like throwing up.”  He ran water from the stained kitchen sink into a paper cup and took a drink.
“There they are.”
Hancock picked up a vial from a folding table with a torn top, dropped a tablet into his palm, placed it into his mouth, and drank again. He sighed and sat down on a wooden chair.
“Rumble rumble, I’m going to tumble,” he started to chant in monotone. “I can’t grumble about the state I’m in. Clinic’s no picnic, I’m an impatient outpatient, sentient being whose been shoved into ...”
He stopped. “What is this. Limbo? Purgatory? Whose madness put all this together?”
Rain, rain. He stepped back onto the roof, looked over the edge into a small wood-fenced yard below, mostly dirt and weeds. Through the closed window of the next house, very close, he watched a seated heavy man in an undershirt and shorts and a slimmer woman in a slip. She moved around a kitchen. On the second floor. Below.
I could jump, he thought, head first. Break my neck. Then it would be over. What would they do with my body? He knew he was visible as twilight darkened the neighborhood, lights turned on inside the scattered houses on small lots. The man in the undershirt stood up, walked to the window and looked out, turned to the woman and pointed. He sees me, Hancock thought. She looked out as well in her slip, a can of beer in her hand, then turned away and disappeared from view. The man sat back down in the chair and appeared to speak to someone Hancock couldn’t see.


My aim is more than 40,000 words - more elaborate depictions of characters, more complex plot)
Posted by Unknown at 3:38 PM No comments:

STRINGER, my short novel, is now available from our distributor and soon will be from Amazon.com and other booksellers. Click here to view its web page. Synopsis is below. 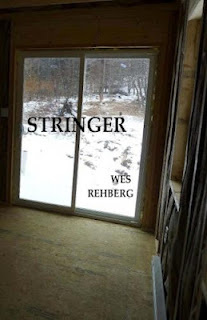 RETIRED JOURNALIST MENACED AS HE PROBES
DEGRADING CONDITIONS RURAL ELDERLY FACE
A retired and semi-reclusive former journalist who strings for a local weekly newspaper is urged by a woman activist who brings meals to rural homebound elderly to help her expose degrading conditions some live in.
Her request involves him and his sculptor wife in an investigation that leads to threats, local political corruption, personal conflict, a reunion with a painful past and a choice about his future.

Posted by Unknown at 3:02 AM No comments:


I'm soon to turn 76. What this means about future longevity I have no clue. But. Rather than wait months or years at my age for a traditional publisher or agent to decide the market or literary value of my work, I'm deciding. People may like and buy them or not... They're out there.
Posted by Unknown at 11:24 AM No comments: 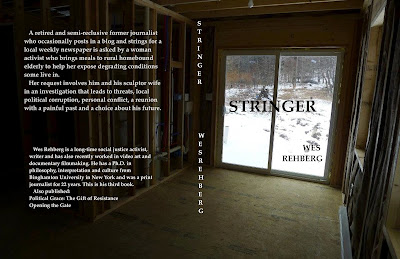 Agony, now working on the third draft of my short novel "Stringer."
A synopsis:
A retired and semi-reclusive former journalist who occasionally posts in a blog and strings for a local weekly newspaper is urged by a woman activist who brings meals to rural homebound elderly to help her expose degrading conditions some live in.
Her request involves him and his sculptor wife in an investigation that leads to threats, local political corruption, personal conflict, a reunion with a painful past and a choice about his future.
Posted by Unknown at 12:32 PM No comments:

Now to the point of resolution of the first draft of my short novel "Stringer" -- novella length I guess,  according to the chart below, about 24,000 words or so. Probably will end up about 120 pages, paperback length, unless revisions broaden or shorten it. Okay, enough anxiety. Time to get it on with what I think is the final chapter ...
Later ... Draft written -- now the next hard part, editing, revisions, assessments ...

Posted by Unknown at 5:46 AM No comments:

Below is an extended synopsis of my book "Political Grace: The Gift of Resistance," available at Amazon.com and Barnes & Noble as well as other book sellers. Its web page is http://www.wildclearing.com/politicalgrace.html


Synopsis (Prologue)
Philosophy and theology have increasingly turned to the problem of the rising numbers of people who live in extremely severe and abasing conditions of oppression, people who are surplus to global economic and political orders which the oppressed define as "neoliberal" and "neocolonial." This work, Political Grace: The Gift of Resistance, is part of that turning, through conversations with those who were and have been living under oppressive conditions, especially in Central America and Mexico, and through conversations with phenomenology, feminist theology, feminist jurisprudence, ethics, and liberation theology.
There is an assertion that divine grace, and the autochthonous organization of the "lifeworld" which phenomenologists discuss, act in concert to seek to enable and empower the flourishing of all things, including humans, who have the reflective capacity to understand, conceptualize, imagine, produce and judge.
The actions of grace and the autochthonous are in a sense the same as they move to privilege places and spaces where flourishing is impeded, to help mediate opportunities for flourishing.
What frequently occurs when people living under oppressive conditions seek to become aware of, or change their circumstances is a backlash by those who control political and economic conditions. This backlash results in resistance. Grace, thus, is the gift of resistance, political and economic, and for the author, nonviolent.There is also an assertion that there is emerging within creation a more intimate and deeper understanding of the connections within which humans thrive together and with the planet, a fragile emergence.
To characterize this emergence the author has employed the neologisms "transintuitivity," "transsubjectivity" and "transreflexivity," each described phenomenologically and theologically. Also asserted is a theology in which the divine is described as emptying itself entirely into creation, empowering through grace and its own risk, through flourishing, through enhancing connections, including those that are considered intuitive, subject-to-subject, and reflexive. These connections, especially present in such sites of resistance as Christian base communities throughout Latin America, can be seen in the daily lives of people who theologize about their circumstances as they seek to discover equitable means of survival within a global economy that has left them surplus.
-- Wes Rehberg

Posted by Unknown at 3:20 AM No comments:

Brief synopses of the five short stories in my new book “Opening the Gate” are available below. Kindly check them out:
The Enduring”: Two shotgun-bearing elderly sisters who have been forced to look after a disabled but violent teen nephew in their rural home encounter two significant visitors, an ex-convict who worked in forest lumber operations and another who has a plan for their property but runs into trouble.
“The Fog”: A 17-year-old New York City street kid reflects on encounters he had when he was 14, living in a three-room flat with grandparents, his mother and brother, his failure in school, his independence, and a new beginning.
“Scooter”: A scooter-driving drug user moves in with a dying elderly woman alcoholic after a meth house fire, much to the consternation of suburban neighbors.
“Tina’s Nicaragua Story”: A nonfiction recounting of a meeting in northern Nicaragua with a woman whose husband and daughter were killed when contras crossed the nearby border with Honduras and attacked her community.
“Jail Birds”: Offered in the first-person, a narrative told by a clergyman who reluctantly counseled murderers in a county jail and maximum security setting and had trouble in a divided church after a visit to Palestine.
Its web page is here: http://www.wildclearing.com/gate.html
Posted by Unknown at 2:45 AM No comments: