Rough draft chapter one opener - "Windows in a Vacant Building" - a children's storybook for adults too.

"That one," Jennelle Jones said as she, her twin brother Jesse and father James walked past kennels in the Riverview County Humane Society shelter.
"He's too small," Jesse said. "And look at those little legs and fluffy white hair. Not for me!"
"It's not a he, it's a she," Jennelle replied. "And what's size got to do with it? This dog is special. Besides, look at the name tag on the cage's door. It says 'Jillie,' with a J. She fits right in."
Jillie moved closer to the three on the kennel's gray concrete floor, looked up and wagged a tail that looked like a plume.
"J for 'Jerk' would be a better name for this dog," Jesse said.
Jillie barked in a way that almost sounded like "Hey!" Their father laughed.
Jennelle felt an impression in her head that mystified her, like an intuition. She looked at Jillie and the dog winked an eye and conveyed what seemed to be a smile. "I'm the one, you're right," Jillie seemed to say.
The twins' father wondered why the small dog occupied a large kennel with much bigger dogs as neighbors. He walked over to an older, taller man in jeans mopping the floor of any empty cage. He could smell the disinfectant.
"Why is this dog in such a big kennel?", he asked.
"Oh, that's Jillie," the man answered. "She hated the small kennels and let us know about it."
"What do you know about her?"
"She's odd, that's for sure. People take to her but she shies from them. This is the first time I've seen her be so open toward any visitor," the man said as he removed his ballcap and brushed his gray hair. "How old are your kids?"
"Both twelve, they're twins."
"I'd bet she'd be great with them. Look how she is."
James turned and saw Jillie on her hind legs, panting and touching the kennel door below the latch that opens it.
Jesse laughed. "She's trying to open the gate," he said.
"Dad," Jennelle yelled. "This is the one. Can't we bring her home!"
...

Posted by Unknown at 2:42 AM No comments:

I've been changing how I write now with options expanded at little cost. This I'm writing with a Logitech keyboard hooked up via Bluetooth to an old version of the Galaxy Tab using the ColorNote app. Type is easy to read, the method is ultraportable, and I can upload drafts to Evernote or Google Drive for eventual transfer to Scrivener, the authoring program I use on a old refurbished MacBook Pro for final composition. Or I can paste the text into a Word and Pages program if I wish.
The key feature this way is portability. I can write wherever without lugging around the laptop. Plus, with Evernote and Google Drive I can skip this step and write on either of these, or edit while the draft resides there. Connected to the Cloud, there's little hassle. So, now, I'll upload this and add text in Evernote.
Okay, now I'm in Evernote where the view of the type is smaller but readable on the 7-inch screen of the Galaxy Tab. Many more lines are viewable, which helps in viewing what I wrote before. So I can actually compose a draft here as well. Now i'll copy this and create a new file in Drive to see how that works.
Back in Evernote, I discovered that writing on Google Drive in the Galaxy Tab there is laggy. I tried the same going cross-platform on the laptop with no diffiulty. But I'll now exclude Drive as an option on the Tab and use Evernote instead. I haven't tried Drop Box on this trip. Now I'll copy this and return to ColorNote, where I'll upload this experiment to Blogger.
It uploaded fine. I'll leave it here for now.

Posted by Unknown at 8:57 AM No comments: 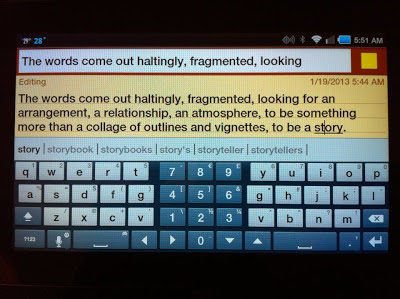 Posted by Unknown at 8:05 AM No comments:

When I pray these days it is to a mystery, a mysterium tremendum that cannot be named but who I call Gracious One as an intermediary. To me it is also guardian and guide. It makes sense to me that it encompasses more than I can imagine and represent. It also makes sense that it embraces human notions of compassion and wisdom, common characteristics among many religious and spiritual expressions. But I make no dogmatic claims this way. The magnitude of uncommon understandings and religious attitudes about this mystery prohibits any singular claim.
Also, the brutality, wars, vicious attitudes and cultural rigidity that have resulted from dogmatic claims about how this mystery may be represented further prohibits a singular claim, characteristics that make absolutely no sense when I consider it in the context of wisdom and compassion.
I write this as both believer and skeptic, as a person who once underwent a late-in-life struggle to be an ordained pastor in the United Methodist Church, as one who knows that the story of Jesus Christ has not been accurately represented in scripture and in fact has been misrepresented both in oral tradition and in what eventually became what some argue is the "gospel truth."
My struggle about this, part of the “holy pain,” has been with the "gospel truths" of religion and the dogmatic assertions that have resulted. I prefer to live in the question rather than the answer about how the mystery should be represented. The answers may have provided people with assurances but they have also resulted in unspeakable agony and outrageous charlatanism.
In a sense, the book is about my lifelong difficult relationship with church and its representations of holiness and humanitarianism. It’s also about alternative and sometimes radically outrageous ways to seek an understanding of the holy, research into what I called political grace, human rights efforts I thought to be holy, disappointing difficulties as a pastor over a divided 10-year period as well as with the ordination process, occasional overenthusiastic adoption of theological stances, and a continuing resolve to pray to and try to understand what I call Gracious One.
My own story with religion isn't one of unspeakable pain but has been acutely painful at times nevertheless. It has also been enlightening, passionate, assuring. and at times ecstatic. What is written here is autobiographical then, my notion of holiness and how I relate that to the notion of “church.” 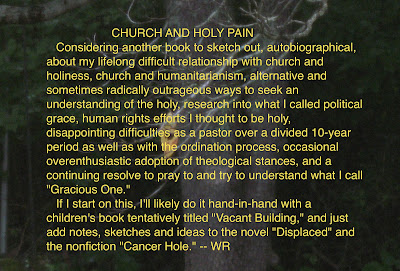 Posted by Unknown at 7:11 AM No comments:

2013 WRITING APPROACHES
I need to reweave the novel "Displaced" back into the writing mix, to at least outline the thematic character lines. I miss working with the characters, their interactions, their perceptions, understandings, conflicts, actions, exchanges, musings. I think it will leaven the nonfiction "Cancer Hole" and the children's book I'm tracing out, "The Vacant Building." Also in there is the short story "Elrod and Raphool." A little here, a little there, as long as it feels productive and not too distracting, though I can focus for a somewhat extended period while writing.
Though I don't feel knowledgable about poetry, three poems have been published, so I might try to write that way still, also for leavening, not necessarily to try to publish. It helps nuance, atmosphere, ambience. The outlining approach is a switch: I had let characters show the way in the fictional short stories and the "Tilt" trilogy.
In "Cancer Hole," the approach is yet different. I'm putting down vignettes, investigative bits and anecdotes - Thens and Nows and Reflections - and will likely edit and assemble and reassemble them. The narrative line is my two prostate cancer episodes, the one that ended in 2004 and the current one. This is piecemeal but it's how I set out at first and right now seems the better way.
This is the approach I'm unwinding, rewinding, weaving, circling around, holding up to the light this coming year. Snow in the woods and fields outside, late dusk. Dogs barking at the unseen. Eileen writing and painting in the other cabin room.