“And a new day will dawn for those who stand long,
And the forests will echo with laughter…” - Led Zeppelin ...
Done with self-publishing books -- since I’ve had a four short stories published in literary journals this past year, i have more confidence in writing this way.
Agonizing and chancy as it is, then, submitting to publishers is the route for my young reader’s novelette “Windows in a Vacant Building,” the in-process novel “Uprooted” (based on my self-published trilogy), another one taking shape in my imagination, and a collection of short stories on the drawing board that includes those in the journals.
An overwhelming ambition … for a person who started out this way in the beginning of 2012 (at age 75). And why not? ... !
When I’ve completed “Uprooted” I’ll pull the trilogy off the market (“Stringer,” Turned Loose,” “Tilt”) to give this improved version a chance.

Posted by Unknown at 7:44 AM No comments:

EXCERPT FROM MY CRIME STORY "ELROD AND RAPHOOL" - DRAFT IN PROGRESS

Excerpt from "Elrod and Raphool" - draft in progress ...

Old Ironworks. Raphool could be in danger. I need to check this out, Elrod thought as he left the homeless center, walked across a large asphalt space, past a produce market and to the railroad tracks that led to the location of what had been a large industrial zone, now long dormant and in decay.
Elrod strode slowly and entered the grounds of an abandoned old ironworks and passed through long shadows from its skeletal structure, now silhouetted in the waning daylight. He hoisted his backpack and decided to park himself high within the structure, climbing along a low angled outdoor conveyor until he reached a spot beneath the lip of a metal roof where he believed he’d be undetected, where the floor leveled out.
Safer here, he assured himself. Private eye Elrod needs to collect his thoughts. Maybe I can spot Raphool from here.
A noise behind him interrupted his thoughts.
“Hey!” a voice called. Elrod jumped up, startled, his head hitting the low roof. He kneeled and reached inside his backpack for his box cutter.
“Hey, who?” he replied.
“It’s Raphool.”
“I’m no fool. Show your face.”
Raphool, even shorter than Elrod, stood his full height under the low roof as he walked across the grated floor, creaking metal marking each step.
“What are you doing here?” Raphool asked.
“What I’m doing has already happened. Trying to find you. Folks at the shelter have opened it up for the night while murder lurks about. I thought I might see you from up here.”
“We’ll settle here for now, then,” Raphool said. “I want to see if anyone might come into this area tonight who normally doesn’t hang out here.”
“Why you so interested?”
“Like you, I like to investigate.”
“You’re a cop. Undercover.”
“Raphool is no fool.”
“Neither is Elrod.”
“We’ll leave it at that. I brought sandwiches and water. I’ll share it with you. You won’t have to go back to eat. Besides, it’s almost dark.”
After nightfall, Elrod and Raphool heard a vehicle ride into the abandoned area, pull up next to a rusted crane, and stop. Two truck doors slammed.
“We can’t see from here,” Raphool said softly
“It’s a diesel pickup,” Elrod whispered. “Old, from the way it sounds.”
“Good observation. We don’t dare move, they’ll probably hear us.”
Voices murmured from below, the pickup doors opened and closed again and the vehicle turned and drove around the skeletal structure, headlights scanning the littered asphalt and broken concrete below. Elrod and Raphool could see them from above through the girders and conveyer rig. The two quietly lay flat on the floor grating as a flashlight beam scanned the structure, the truck’s lights now out, the motor running.
“See anything?” one of the men said.
“Nothing.”
“I can’t believe there’s none of those creeps hanging out here.”
“They ain’t under the overpass and they ain’t in here, and the floor’s all wet in the old warehouse, so they ain’t in there.” ...

Posted by Unknown at 2:12 PM No comments:

My short flash fiction story "PICKPOCKET" is now published in Sugar Mule Literary Magazine The story begins like this (click on link below for the rest:
..."The treasure easily slides out of the pocket into my hands.Maybe the pocket of that person hanging onto a subway strap, his eyes meeting his own in his reflection in the train window, tunnel lights flashing by, stroboscopic. Or the three others crowded together near the pole by the train door, all four wearing coats. All I know is the pocket I reached into, jostling as if to move people aside so I could pass through, the pocket my prey..."

Chrome Drive Limitation for Long Documents?
Compiled novels “Stringer,” “Turned” Loose,” “Tilt” and the incomplete “Displaced” into a Google docs file in the Chromebook - working title “Trio” - 135,000 words, itself a longer novel length -- Question is whether all this will be worth revising and reworking into one new, more compressed book. Don’t know, I’ll need to go through it. Surprised, though, that I could copy and paste all this copy together in Chrome Drive, though I won’t know how successfully until I start testing it. Chrome doesn’t have a merge application this way for documents, so it’s copy and paste.
So, the test …
Nope, not so successfully, it appears - bottom end won’t edit properly, cursor appears a line below the line I wish to edit for a reason I’m not going to take the time to explore and worry about.
Will have to do this work on my old MacBook Pro, in Scrivener software, where the compilation was simply a smooth merge into workable parts and the entire document edits smoothly too.
Okay, new observation:


Looks like cursor drift downward toward the end of a file is a Google Docs problem in Chrome Drive with big files. I wrote “Windows in a Vacant Building” on Google Docs, 10,000 words, in separate parts, then compiled those. The cursor drifts in this, too, no matter the font size or line spacing..

"TINA'S STORY OF DEATH AND SURVIVAL IN NICARAGUA" NOW PUBLISHED

My nonfiction story -- "Tina's Story of Death and Survival in Nicaragua" -- is now published in the Black Earth Institute's "About Place Journal" ...
Link to the story: http://aboutplacejournal.org/earth-spirit-society/wes-rehberg-ii-i/ 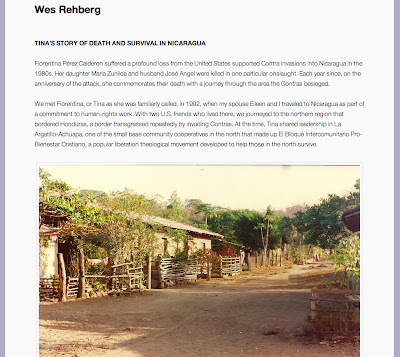 Posted by Unknown at 4:14 AM No comments:

I imported the scattered episodes of "Windows in a Vacant Building" into Scrivener authoring software to compile them and go through the combined texts with a hard edit. This is my novelette for young people and adults. Some previews of first draft texts are in posts below.
Beautiful thing about the software is the ease with which it lets one merge doc files simply by importing a whole written sequence into an embracing new file without copying and pasting. It just stacks them up in the order one designates. Love it, because usually I write texts in different files and even on different platforms. One can rearrange sequences simply but clicking and dragging along a time line.
Now the revisions and reworkings ...
On another note, my flash fiction piece "Pickpocket" will appear in an online version of the literary magazine Sugar Mule on August 14. My nonfiction short story "Tina's Story of Life and Death in Nicaragua" will appear in Black Earth Institute's About Place Journal this fall, with photos.

Posted by Unknown at 3:02 AM No comments: